Big serving brothers battle it out

The battle of the big serving brothers was a highlight of the final round of Soffe Cup tennis before the Christmas break. 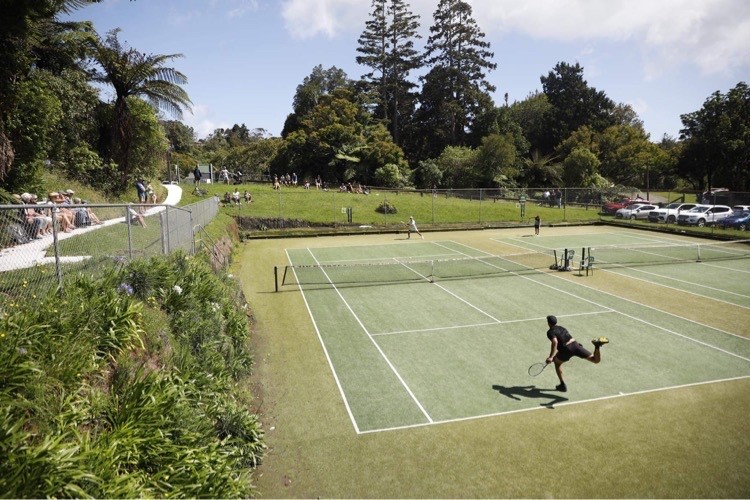 The brothers put on an impressive performance, littered with aces on both ways, which kept the Huatoki spectators well entertained.  Amrit, who is currently ranked 172 in New Zealand, stayed in touch with Ajeet, losing the first set 6-4, before Ajeet wrapped up the match 6-1.  The rest of the tie also fell the way of a Rotokare side which is riding high at the top of the table.  Rotokare won the encounter 14-2 with Blair Crowley comfortably seeing off the challenge of Alistair Nairn 6-4, 6-1 and Kyle Crowley besting Shane Douglas 6-2, 6-3.  It took a tight three set battle for Rotokare’s Luis Silva to see off the challenge of Huatoki captain Ross Lilley 1-6, 6-3, 6-3 completing a clean sweep for Rotokare in the men’s singles.  Three of the four women’s matches were won by Rotokare, with Chantelle Peters and Juliet Carswell posting solid wins.  Huatoki’s Sophie Robertson took on Karen Cranston in an entertaining three set battle which saw Cranston pull away for the victory 6-0 in the third set.  Hannah Sifleet picked up Huatoki’s only singles win in the number three women’s position, getting the best of Alex Macesic 7-6, 6-1.  All the doubles matches went to Rotokare.  The combines were closer, but Rotokare won three of the four 9-7.  Huatoki’s second win came in the number four combines match, where Douglas and Carswell won 9-6 against Silva and Juliet Farquhar.

Down the road at Pukekura, Oakura edged the home side by two sets on a countback after the teams split the matches 8-8.  Boasting three players from the Mitchell family, Graeme, Taylor and Jack, Oakura came ready to play.  Their women’s line-up secured three wins from four with Taylor Mitchell, Sue Oldfield and Rachel Volcani winning in blustery conditions against Lili Lay, Anne Wilson, and Olivia Pennington.  Playing for Pukekura at number 4 Jenny van Praagh turned the tide, winning her match 6-3, 6-3 over Chris Davies.  The men’s singles went the way of Pukekura with Tomi Avery, Andrew Moffat and Ray Teunissen securing wins over Len Adamson, Gavin Stanley and Jack Mitchell. At the top of the line-up Graeme Mitchell, playing only his second singles interclub match this season, accounted for Jordan Whittleston 6-2, 6-3.  The injection of Pukekura’s Mark Belcher into the doubles helped the home side take both men’s fixtures, although Avery and Moffat just edged past Adamson and Stanley 10-8 in a super tiebreaker.  The women’s doubles both went the way of Oakura, leaving the tie all square going into the combines.  With Graeme and Taylor Mitchell winning a close match over Whittleston and Lay at the top and Mitchell and Davies winning the number four match over Moffat and Jeanette Harding, Oakura were looking good for victory.  However, Pukekura’s Avery and Pennington got the job done against Stanley and Vocani, leaving the final match on court.  Pukekura’s Belcher and van Praagh held their nerve and secured the win over Adamson and Oldfield in the tiebreaker and forced the countback.  In the final match of the round Okaiawa finished off their strong first half of the season in style, with a resounding 15-1 win over Inglewood.  While the scoreboard was not pretty reading for Inglewood, they can take heart that several matches went right to the wire, before falling the way of Okaiawa.  Both women’s doubles were decided in a super tiebreaker.  Rounding off the family theme, three of the Spurdle family, Derek, Maria and Alexandra turned out for Inglewood.  Okaiawa’s well balanced and settled line-up will make them a threat to all teams for the remainder of the season.

Stratford had the bye this week. Soffe Cup competition will now break over Christmas, returning on 22 January.